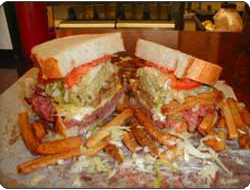 In France, much restaurant food comes in small, delicate, intricate portions that would double as works of culinary art.

Look, comrades: Lucky’s Sandwich Company is a comfort food place with plenty of beer, chicken wings, and loud Cub fans,  but their main fare comes from the ungodly huge sandwiches. I’m not gonna lie, they’re pretty good for gigantic food. They’re filling (as hell) and the ingredients aren’t noticeably processed. It’s a tradition in Pittsburgh and many other places like it to have giant sandwiches filled with everything – including the side of fries.

So, how good are the fries? Let me put it this way: I would rather have year-old McDonald’s imitation fries than the fries on these sandwiches. While most fries are yellow and brown, these are burnt orange, which would be forgivable if they were sweet potato fries – but they aren’t. They smell like the bathroom at an Al’s Italian Beef, and they slip from your fingers with all the oil if you try to pick them up. I ate a Lucky’s Corned Beef sandwich in my room and had to pick out all the fries and throw them away – and my room still smells awful. It just got cleaned two days ago. This is demonically unforgivable. 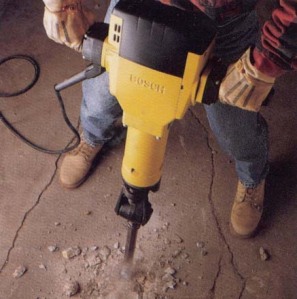 This is what the fries do to your tongue. 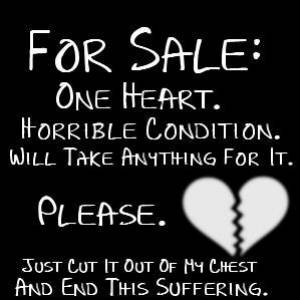 This is what they do to your metaphorical heart. 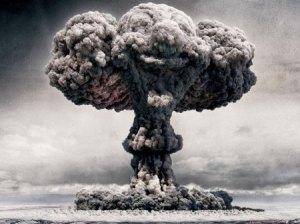 And this is what they do to your literal heart.

What’s even more mind-boggling: Lucky’s has a policy of no-mayonnaise-whatsoever on their sandwiches. Perhaps they realized “hey, if the sandwich has these slow-death sticks we call fries AND mayo, all of our customers would get pacemakers at our expense!” I would prefer to eat a sea of miracle whip compared to these life-sucking stomach torpedoes that they don’t even put on the side!

This place isn’t in the “the bad” category because, sans the fries, the sandwiches are damn good. So, if you’re going to order a Lucky’s sandwich, say “no fries please” unless you’re into taste bud masochism.

Scroll down; looking at this logo actively lowers your life expectancy.

Comrades, I’ll be honest with you (because let’s face it, if I were going to say “this statement is false,” I’d probably kill all the robots reading my blog. And – oh crap, I just did, didn’t I. Whatever, they were probably spambots). I’m a food critic with Addison’s Disease. Now, let’s not get all teary and Lifetime TV about it – I’m mostly recovered, the height of my problems was in 2006 and I’m doing great. So I’ll cut to the chase: if I throw up, I probably have to go to the ER.

Not a particularly appetizing way to begin a food review, is it? Well…

It all started when I went on my bike to Costello’s in Lincoln Square. I live in Lakeview, so it’s a moderate ride away, but it seems longer with the crazy drivers.

I walk in and I have to weave around a mishmash of dancing kids in front of a live children’s singer on the podium near the entrance. It’s situations like this where you realize how much emotional, financial, and legal damage one wrong footstep of a non-skinny 23-year-old guy can create, so it was more than a little tense. Thankfully this was a one-day deal, and sometimes they get cool people from the nearby Old Town School of Folk Music.

I asked an employee if this was a kid’s birthday party or something, out of curiosity. My reply was a hateful “It’s everyone’s day.” Geez, just call me a capitalist pigdog if I am one, ma’am.

The decor relies on white, green, red, and yellow tile. It’s like if a McDonald’s had sex with a hot dog joint in Englewood – that’s the decor.

I ordered a ham sandwich with no tomatoes ( I’m not a big fan of tomatoes unless they’re good), a bag of chips, and an orange juice. Should be fine, right? It looks better than the other options anyway (rule of thumb: it’s just a bad idea for your body to order any sandwich called “the mess.”) The dreary lady at the counter takes my $9.10 —

Let’s just stop right there. A GOOD MEAL AT A FAST FOOD PLACE SHOULD NOT COST NINE FUCKING DOLLARS. More than seven, and you’re getting screwed over. I didn’t know Marie Antoinette ran this place; you’d expect her to have a French thing on Michigan Avenue. 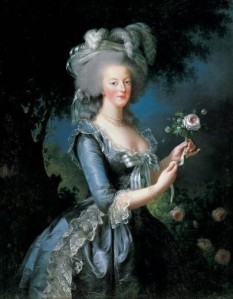 Relatively speaking, her severed head is probably 70% more appetizing than what I was served.

And after an unusually long wait where they had to bake my sandwich (not toast, mind you), I was given a steaming heap of a few pieces of something that resembled a ham sandwich if you thought hard enough. It smelled worse than anything I’d been served at Philly’s Best. In fact, that’s one thing I’ll give Philly’s Best: they aren’t this Cthulhu-forsaken place.

After two bites, I felt sick from how greasy and unhealthy it looked, smelled, tasted, felt, and even sounded like as I ate it. I had to throw the whole meal away. And this is where the Addison’s disease comes in: I staggered out the restaurant coughing, trying to find someplace to relax so that I don’t puke.

Then I remembered: oh crap, I have to ride my bike home. And this horrible sandwich shop drained my ten-dollar bill. I only had $1.50 (combined with some spare pocket change) for the CTA! So my only options were to beg the Western Brown Line stop people for 75 cents, or ride home and possibly end up in the ER.

Luckily, I chose the first option and walked my bike over to Western. I know my limits. Of course, soliciting is not welcome on the CTA, so I presented my problem straight to the CTA woman, who shall remain nameless for the sake of her job.

Me: Hi, I have a kind of embarrassing question – I got sick and I can’t ride my bike home, and I’m short 75 cents.

CTA woman: Come with me. Put in what you have.

Then bless her rapid-transit heart, she put in 75 cents and told me not be embarrassed and  feel better.

Comrades, I have found the guardian angel of sick customers. 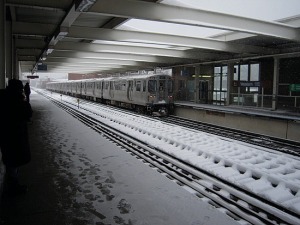 Where angels don't fear to work.

A little confession: I have never had Texas toast before. If I have, I probably didn’t know it was Texan and assumed it was “oversized disgustobread mark II.” Now, thanks to the good folks at Cheesie’s, I can say that actual Texas Toast is a good thing.

You probably couldn’t tell from the previous article about the execution chamber that is Philly’s Best that I do, in fact, like unhealthy food once in a while. And make no mistake, Cheesie’s is completely unhealthy, as usual with any institution, establishment, or nation that combines bacon with grilled cheese. But it tastes amazing.

Cheesie’s officially opened just this week, and replaced a less-than-pleasant burrito joint, Tradicion, after they were “closed for painting” for an indeterminably long couple of weeks. I’ve never been there because of the nasty stories I’ve heard about it, and the unsafe nocturnal characters that hang around there. That, and there was a Chipotle farther down the street that won’t give you a free tapeworm with a plastic sombrero.

I’ve heard from the cute desk lady that some less-than-friendly folks come in late at night and ask for tacos. Oh my goodness gracious dearie me.

Once I went in Cheesie’s, the smell was hard to ignore. It wasn’t exactly a great smell, nor was it terrible, but it was hard to distract myself from it, and that was mildly annoying. But then Omnomnomiel, the guardian angel of food, came down from Heaven and bitch-slapped me with Excalibur. He said, “Dammit, Dave! What do you expect from a grilled cheese place, minty freshness?!” Fair enough.

The particular sandwich I had was the special for the month: the Chicago-style hot dog cheese sandwich. I had to eat half of it and throw the rest away because, well, I’m on a diet. But I immediately regretted doing so and went trash diving. An angry spider demanded that the sandwich was his. The previous two sentences were outright lies. But damn, sliced vienna beef franks with all the trimmings on grilled American and cheddar cheese on toast? Please, someone tell me that the other half went to the Sandwich Shop in the Sky and I get to eat it after I’m dead.

Did I mention that there’s a bar in the back? Damn right there is.

You call that a salad?

Okay look, Philly Cheesesteaks at Philly’s Best don’t deserve to be eaten. They’re sentient, they can reason and suffer just like us – and they know that you’re going to eat them.

So they do their best to look as unappealing as possible. If you’re thinking “Well, it’s a Chicago tradition that my food looks and tastes like marinated 1920’s newspaper shreds with cheese whiz, because if I were to eat something actually healthy, I might as well be a tourist!” then you’re in for a treat.

That is, until the greasy abomination goes down your esophagus. Once it reaches your stomach, how much you feel you weigh is inversely proportional to your actual weight. For example, if you weigh about 300 pounds, you think “oh, this is normal.” But if you weigh 210 pounds, you think “I need to get some exercise after this.” 150 pounds? “Oh god, where’s Jillian Michaels and Richard Simmons to play good cop/bad cop when you need them?!”

Philly’s Best lines the walls with pictures of their fear-inducing food, which somehow usually costs less than a Subway sandwich (before someone thought up five-dollar footlongs). They also have all sorts of fantastic reviews for their restaurant that you can look at while you eat, just in case you need additional verification that you’re eating something socially acceptable. This is a good idea because in all likelihood, you’ll have your doubts in that regard from minute one.

And if for some reason you like food that wants you dead, you’ll be disappointed as well – because when I ordered a small Reuben, it took in the area of 10-15 minutes for the guys in the back to complete my order.

Strangely enough, there is something I’ll give this location credit for, and it’s coming up, I swear.

Among their other decorations, some of the signs near-literally yell at you. The staff sometimes wears t-shirts that tell those asking for free food to “go scratch a cow’s ass,” the online ordering sign insists that “we never want to talk to you again,” and there are directions on the wall for how to properly order a cheesesteak. You are literally told to go over the order to yourself in line, because if you mess up, you’ll be turned away.

But here’s a conundrum wrapped in an enigma for you: at this location, the service is friendly. And that’s what I’ll give them credit for. As much as they’ve tried to stack up their reputation to be sociopathic food fascists, the order-takers will be patient with you if you aren’t a master of the art of being a customer. After all, who is?

So if you like tradition, meat, and attempting to cheat death, in that order, I say go nuts with this place.

The Good and the Bad